In the last meetup, Dr. Mathias Bachmayer presented his Modularis platform. Modularis is all about making control theory and feedback work. Especially, if you want to build robots or mechatronic devices, control theory will play an important role. 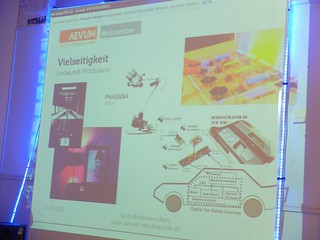 According to Wikipedia, control theory “deals with the behavior of dynamical systems with inputs, and how their behavior is modified by feedback.” To simplify the development of these systems, Mathias investigated a number of patterns and electronic building blocks. This is the background of the Modularis project, which has its roots in Mathias’ dissertation research going back to 2005 (way back before Arduino became popular.)

Modularis provides a number of sensors and actuators that can be easily connected as shown below. While the early Modularis boards had rather large connectors, the newer boards became tinier and friendler for advanced integrations.

An important feature of Modularis is the use of the I2C bus. You can easily connect sensors and actuators with ribbon cables. And, you can connect a microcontroller for system control too. Currently, Modularis supports Atmega168 and Atmega328 microcontrollers which are easy to program with the common AVR tools. Mathias is experimenting with other microcontrollers such as ARM Cortex based devices too. But contact Mathias for more information on this.

We then had an overview of common Modularis boards, such as bridges for CAN and LIN, as well as Wifi. The Modularis system also works with a Raspberry Pi. The highlight of the evening was a demo of a plotter that was built with Modularis.

After the talk, we had some discussions about differences between Modularis and Arduino. Mathias explained that while Arduino is nice for basic electronics, he thinks that Modularis provides a much better entry point for learning about control theory and systems. We are planning to have some more meetups about teaching system design with Modularis soon.

A note about getting a Modularis Kit: Mathias is still working on the online shop, opening around 1st of July at www.aevum-mechatronik.de/shop. You will be able to buy the basic module MOD000 with a USB programmer. Code and libraries will be available at Github.

For the first meetup of the year we were lucky to have a number of TI connected Launchpad boards including some sensor boards (“Boosterpacks”). TI sponsored those to MunichMakeS.

The goal of the TivaC platform is to enable IoT applications. The MPUs are mostly ARM based. The best TM4C123x based boards had an impressive clock speed of 120 MHz.

Some of the meetup members liked the sensor boards, even more than the network capabilites of the boards. For example, there was a booster pack with Motion sensors which many tried out at first, and via serial communication, it was quickly possible to read out data from body motion.

But we had a bit of problems too, the Wifi of the Makerspace was a bit shakey to maintain WLAN connection of many devices. So, the stopped at a bit the exploration into the IoT direction.

Also, at least 50% of the meetup members are used to working with MacOS and/or Linux. While Energia supports those, some had problems with the Java version of Energia. For example, Marten had to downgrade his installed Java version.

We had a bit trouble decyphering the pinouts of the boards. On one hand, this could be due to he many functions on the board. There are several push buttons mapped to pins, but not every input worked as expected compared to Arduino code. I found the header file: pins_energia.h very helpful to decode those. Also, the TMC4123x provides pull-up/pull-down input configurations, which are helpful, but it must be known where to look.

All in all, a very interesting hacking adventure. This meetup was certainly a bit more for advanced users. Some members borrowed a board for playing at home, and we are expecting to see more TivaC details soon.

Please help us making the Arduino & Co meetup better by answering again some questions in a survey.

The X-mas hacking sessions began with fast food. “Fast”, because we went straight into hacking.

Thomas showed his progress with the software behind his Roboshock project, a bi-pedal robotics project. He has built an impressive UI to transform raw deta from different sensors into artificial “senses”. Besides, he recently started on another project, a blood pressure sensor based on OpenCV.

At a different table, Michael was working on J5 for the Arduino Yun. While the Arduino community seems to be rather silent about this combination, there is a nice how-to of combining Cylon.js with the Arduino Yun.

Next, Kresimir and me were working on a basic starter project: An Arduino based alarm clock. Since I forgot my DS1307 RTC chip, we “simulated” the time with counters on the Atmega328. A separate blog post on the clock will follow. At this point, it is maybe interesting to mention the Tinyduino RTC shield.

Measuring time with an Arduino is rather easy, so, we progressed towards mounting an old Nokia 5110 display on an Arduino. This was great fun too, and is a topic for a different blog post too. By the way, if you are interested in professional Drone technologies, take a look at Ascending Technologies where Kresi works.

Then, we had the pleasure to welcome Martin Laarmann of the Munich Make team. After a great Make Munich 2014, Martin has started already preparing Make Munich 2015. Martin also mentioned the Modularis board (made in Munich), and a hacking project to make dispenser machines more fun.

After a first meetup with an overview on different boards and kits, let’s explore more the analog Signals of an Arduino. Analog signals make an Arduino different from e.g. a Raspberry PI.

As a special feature of this meetup, we will get a talk by the founders of the RedPitaya open-instruments platform.

We can have more 1-2 warming up talks, and explore projects in groups with some components in the second round.

The slides of the first talk on Arduino are here.

An email list was created: arduino-muc@googlegroups.com - on the email list, we can maybe extend some of the discussions about shops, links, books, etc.

In this first meetup, a kick off ideas for Arduino meetups was presented, and some start with basic demos.

2) Show and Tell: Discuss your latest Arduino experiences and projects

4) Tinkering time: Form small teams and get to play with Arduino

If possible bring your own Arduino and parts. If you need something from the organizer, send me an email first: info@farsinotare.com.

What you need to get started, software, hardware, how to let LEDs blinks and measure temperature, how to use a potentiometer.
Ideas are welcome to make the first meetup really fun.